The Caves of Woe lived up to their name in this session, as four party members were killed by a group of Goblins who were able to put a tactically superior position and surprise to good use.

NOTE: A lot of the monsters (and images) I’m using are from Richard LeBlanc, Jr.’s Creature Compendium, an awesome old-school resource.

The party explored a newly found northern cave entrance in this session, heading east, then south and encountering a group of feral undead cats in a dead-end tunnel. They made short work of the cats, and in the debris at the back of the tunnel found a half-eaten Elven head with a jeweled earring (still attached!) for their troubles. They backtracked and headed due south this time, entering a large, open cavern with a high ceiling and a ten-foot cliff along the west wall. All was quiet, but as the party explored the cavern further, a hail of small boulders fell on them from the cliff above. A cunning group of Redcap Goblins had caught the party by surprise! Two mercenaries along with Eth-Tue the Elf and Aella the Cleric were slain! The Goblins retreated out of sight, meanwhile, Plumb snuck away and attempted to climb the cliff further north where he could not be seen. He succeeded and threw a rope down to the others. The remaining party members climbed up, finding the Goblins loading up on more rocks in a small cave adjoining the ledge. They were able to easily defeat the six Redcap Goblins once they could face them in one-on-one combat. 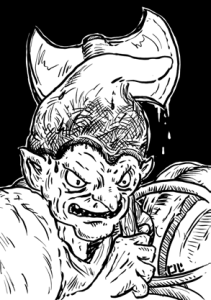 Undeterred after their losses, the party continued south from the goblin cave, through an exit into a open hall. As they approached, a black cat on a small ledge looked at them and darted away into the hall before Garros could skewer it with a crossbow bolt. Peering into the hall, the party spied two glowing archways across from them, along with floor-to-ceiling black pillars along the walls, but saw no sign of the cat. The only light came from the glowing arches – one orange, the other green. It seemed empty, and all was quiet, but when they entered the hall, they were attacked by several flying heads, skulls with wings who screeched while diving from above.

The flying skulls moved quickly and proved difficult to hit, so the party retreated north before the skulls’ screeching could bring unwanted attention. They gathered the bodies of their companions and headed out of the caves through a as-yet unexplored northern route. This almost cost Garros his life, as he was wounded by a spear trap walking through a small, empty room.