Dingo the Hobbit set off for the Caves once again, with his entourage in tow, after a few days of R&R in town. The day was cold and overcast as they set off at daybreak. The journey was uneventful, and it was mid-day when they arrived at the bandit cave. The bandit’s bodies had been dragged from the cave, by what the party could not discern. Dingo set about examining the east door, and the rubble pile.  The door was found to be locked. After some discussion, it was decided the party would circle the hill and search for another entrance. Another entrance they found – on the opposite side of the hill, down a long, narrow tunnel accessed by a cave. Dingo crawled in and soon saw a set of winding stairs, plunging into the darkness. He fetched the party and with lit torches, they descended the staircase.

The stairs opened into a dark cavern, by the torch they could see the start of a pool of dark water in the center, which Dingo tried to give a wide birth by moving the party along the north wall. About 30 feet in, however, a giant crocodile slithered from the pool and attacked! The party fled into an adjoining room, the croc snapping his jaws at their feet. With no other options, t

hey turned and fought, eventually killing the croc. They had but a few moments to celebrate, however, from the darkness to the south they were surprised by a greyish, man-like creature who attacked without warning. He did not survive the party’s onslaught. but they decided to avoid the southern route with possibly more of such creatures.

So they proceeded east, through a door. On the other side of the door they found a small room, empty save for a mirror on one wall, surrounded by gold trim. Dingo was first to try and move it – as he touched it, he felt a jolt and was quite surprised to have aged some decades hence, having completely lost the hair from his head. A second try and he felt rejuvenated [+1 CON]. Not wanting to be left out, Sturig touched the mirror next. He did not feel at all different, until he tried to walk and noted his feet squeak loudly at each step. 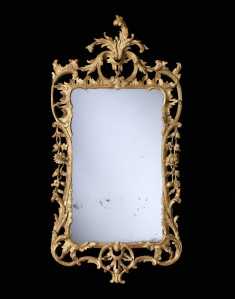 Not wanting to tempt fate, the party moved on, with squeaky in tow. They explored further east and then south, through winding tunnels and eventually ending up in a finished stone corridor, next to a door. Dingo opened the door, which opened inward suddenly, almost sending him headlong into a black pit which took up the entire floor area of a small room. A single torch fell to its doom, but the party was not able to hear it hit bottom. Wisely moving on, the party soon came to another door, which opened into a long, narrow northern corridor. Dingo set out to scout ahead, but had to turn back when he was almost hit by an arrow trap. The arrow whizzed past his head, the noise of it hitting the opposite wall and alerting something that approached quickly.

Dingo ran back south, now being pursued by two goblins atop two wolves. Dingo made it back to the door just in time – Sturig slammed it shut and the party formed up as the goblins attempted to open it. They did so in short order, and the battle was on. One wolf fell to a hail of arrows, the other advanced, the now riderless goblin next to it. All three were killed in the battle that followed, but poor, bald Dingo was skewered by a goblin’s sword and died in a pool of blood. Marton and Sturig searched the goblin bodies and discovered the princely sum of 7GP. Having had enough, the party gathered up Dingo’s body and set out to return to town.

The party made haste to the spiral staircase and left the caves, only to find it was now getting dark! They looked for a good spot to camp, and luckily had a quiet, yet cold night in the Ravenwood. The next day, about an hour after departing, they saw two large, flying creatures who circled and quickly dove in! The party dropped the body of Dingo, running for the woods. The pair of flying creatures [cockatrices] scooped up the body of Dingo and were gone. They were not seen again, and the party made it back to town a few hours later, less the body of poor, bald Dingo.