Both D&D basic sets in the late 70s and early 80s tried to simplify D&D but of course at the time, what we now think of as “Original D&D” (OD&D) meant the original three Little Brown Books (3LBBs) plus all of the supplements. Chief among those was the first supplement Greyhawk, which changed the game fundamentally into what we recognize today as “core D&D” – four base classes including the thief, variable hit dice and weapon damage, higher level spells, attack routines (claw, claw, bite) and d8 hit dice for monsters. 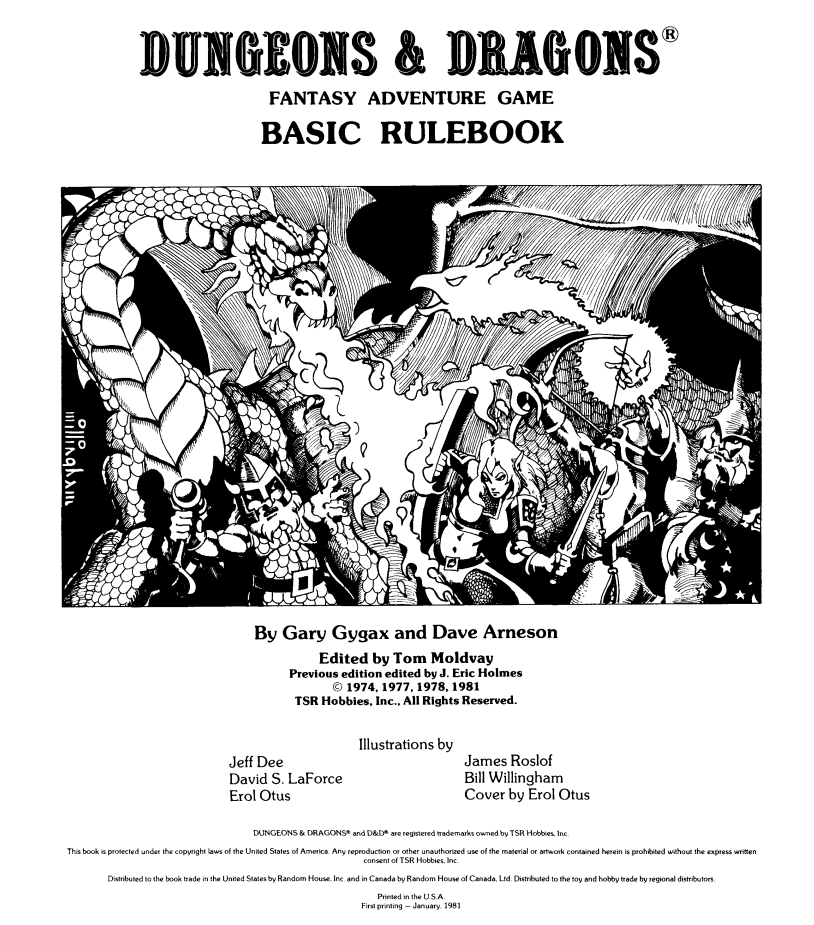 Moldvay Basic D&D (B/X) in 1981 was an attempt to clarify even further what Holmes Basic had done in 1977, but still used OD&D at its core (both authors were clear at the time on their intent to clarify OD&D). Now, most OD&D clones start with either the 3LBBs as a base (Swords & Wizardry White Box, Delving Deeper, Full Metal Plate Mail), or the 3LBBs plus Greyhawk (Swords & Wizardry Core, Iron Falcon), and work forward, adding some rules and changing others. I think it would be interesting to start with B/X and work backwards to the 3LBBs. To 3LBB afficionados, this gives them the best of both worlds – an essentially complete and coherent base rule system, walked backwards in time to revert some of the ‘Greyhawk-isms’. Or, to put it another way, what if Greyhawk had never been published? How would B/X have been different?

Here is what I envision a “no-Greyhawk B/X” would look like:

Everything else can stay the same, including race-as-class, which is not all that different from forcing demi-humans into one class option. I should mention that Labyrinth Lord Original Edition Characters (LL OEC) does something like this in that it starts with LL as a base and changes the player options to be more like OD&D – but as I noted in my review of LL OEC, it has an identity crisis and keeps much of the trappings of Greyhawk.

So what are the advantages to doing this? You may ask, “Sure Doug, that’s great and all, but why not just play 3LBB D&D”? It’s a valid question. I see B/X as a solid and complete base that fills in the gaps and clarifies many of the rules from OD&D. So why not use it as-is and just tone it down a bit to get to a place I and other 3LBB fans are comfortable with?